Nerdsville Book Review: The Ocean at the End of the Lane, Neil Gaiman 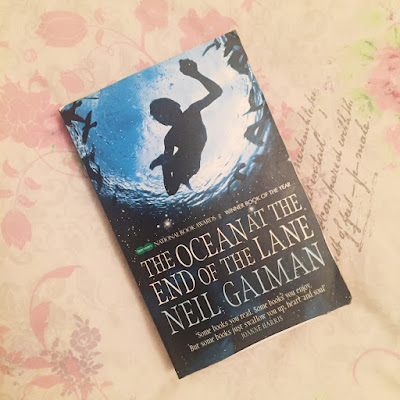 I read this book for the second time recently and it is simply put, an adult children’s book.

A nameless main character narrates the story, which isn’t something I remember coming across. I like stories to be personal, like you know the person or can picture the person in order to get a connection, but it wasn’t necessary here because Neil Gaiman draws you in from moment one “It was duckpond, out at the back of the farm. It wasn’t very big. Lettie Hempstock said it was an ocean…”. You immediately get a vivid picture in your head of a vast field with farm animals, living together in harmony with a little tiny pond at the end of it. You immediately start asking questions like, who is Lettie and why does she think the pond is an ocean? What wondrous stories does she have to tell about the ocean? Why does it feel like this is going to be a significant part of the story – why?!

The book actually starts with the narrator revisiting his childhood village as an adult, where he comes across someone he once knew many years ago which leads to them talking and reminiscing about when he first moved there and what transpired after. I really don’t want to give the plot away as my telling of it wouldn’t do this book justice, but it tackles many subjects that many children have to deal with at an early age: the awkwardness of trying to figure out who you are, a sad and often troubled upbringing, parental failures, sibling woes, little (if any) friends, and an overactive mind that helps you escape it all.

The Ocean at the End of the Lane had me thinking a lot about how I felt at that age (the narrator is seven) and how confusing I found life and wondering if anyone else felt the way I did. It touches on those subjects with such ease and care, and I did nothing but root for the narrator and his friend Lettie and her family whom have a magical mystery about them that unfolds beautifully as the story builds. A suicide starts off this the dark adventure, and circumstances have the narrator and Lettie fighting dark, scary and mystical powers that enter the human realm looking for them.

The ocean plays a significant part of the story, and although I won’t reveal in what capacity, it has the narrator exploring reality and how events can shape the decisions we make for ourselves and for those around us. It’s quite poignant and has a resonance few books I’ve read recently have managed to achieve.

But what I love about this book is the friendship between the narrator and Lettie. Lettie has an unrelenting faith in her friend and promises him that she will look after him and protect him no matter what. The characters bounce off each other really well and you can’t help but think about some of your own best friends at that age and how feeling so lost can be eased a little knowing you have someone on your side – I think that’s something we all look for at every stage of our lives. They go through a lot together and face many obstacles, but their friendship remains until the end.

Again, I won’t tell you too much and certainly won’t tell you how it all ends, but reading The Ocean at the End of the Lane as an adult will transport you to your youth when anything and everything was possible, where there were adventures on every turn, and if you were lucky, a friend to hold your hand every step of the way.
Posted by An Autumns Grace at 09:09