Foreword: This post has been a few months in the making and I actually submitted this as a piece for a magazine; although it wasn't picked up, it was still a topic I very much wanted to discuss. It hadn't been talked about in so long so I wanted to bring it back to the forefront of everyone's mind, but then boom, suddenly everyone was talking and posting about it and I felt a little deflated. I thought about not posting any longer as I felt others would inevitably write the piece better, but then I thought "my opinion is just as valid as others", so here I am contributing my two-cents. Please note that this isn't attacking anyone, but I really think it's important to not be afraid of having uncomfortable conversations like this as it's the only way things will change. This also isn't going to read as a magazine article as I'm not a journalist and thus, do not wrote that way. It's not a style of writing I personally enjoy reading so would never adopt it as my writing style, plus, I love the way that I write! So here it is, my opinion - always open and always honest.

This is not the first time this issue has been raised and it will continue to be raised for as long as this remains a huge issue. Brands and companies still predominantly use white/ European models and bloggers to promote their products, and one reason that has been muted is because it's presumed the lighter a woman is, the more appeasing the product will be. It's an archaic notion but a persistent one nonetheless. When the magazine W recently published their collection of covers, there wasn't a single person of colour in sight - they released seven covers, seven, yet every cover was of white actors and actresses. When Mindy Kaling was on the cover of Elle there was outrage (from myself included) that her cover was in black and white, whereas the three "alternative" covers, with white celebrities, were in colour. 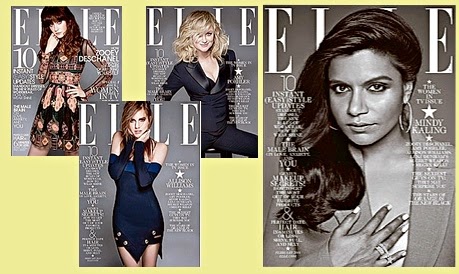 Photography by Carter Smith for Elle. Imagine from Guardian website.
In an article by The Guardian, a nameless female magazine editor (presumably because she recognised her words were nothing short of alarming), was quoted "with split covers [where there are several cover options], you're not relying on one cover to sell your whole magazine, so you can be more experimental and take a risk". These were the words from a magazine editor at the hight of her powers. From a woman who believes putting a woman of colour on the cover is considered a "risk". Where does hope lie if those in power still believe this theory?! And is this theory even true? Lupita Nyong'o has graced numerous magazine covers to rapturous applause and is the current face of Lancôme where reaction has been utterly positive. People have marvelled at her natural beauty as well as praised Lancôme for using a dark skinned woman as their main representative. 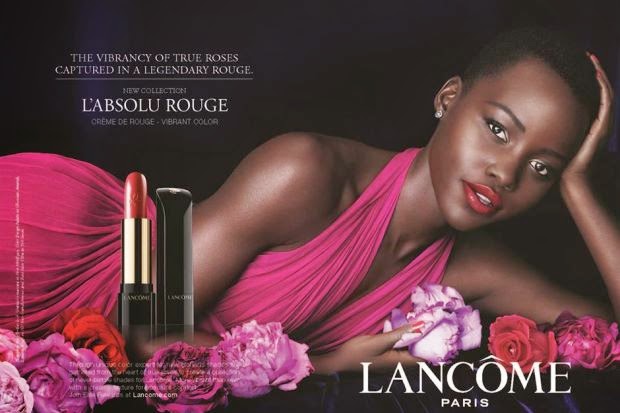 
But Lupita is a small victory. Award season is upon us and once again, people of colour are almost non existent. It feels like lasts years Oscar triumph of 12 Years A Slave was a novelty; indeed, the 2015 nomination for Selma in the best film category screams ''My friend has an uncle who goes to church with someone who has a black acquaintance''. It's insulting. How long do we have to wait for an actual change to happen?!

But it's not just in Hollywood, what about the blogger world? Bloggers have become the new celebrities. They get interviewed, featured in magazines, partake in photoshoots, and have, for the top bloggers, literally thousands of followers the world over. Brands have realised the power of the blogger and know the kind of influence they have, so it makes sense to work with them, but with that they must also recognise that they can't afford to be exclusive. Fellow blogger, Ragini recognised that although she is a woman of colour, she also has her privileges, "I seem to have worked with more brands than I ought, and if I'm absolutely honest, I think size and light skin privilege have more than a little to do with it". Blogging is also global yet there seems to be a pecking order in regards to the haves and have nots. Where Ragini has light skin privilege, she still suffers geographically, "I live in India. I've been approached by more brands than I could name who just disappeared into the ether once I gave them my address (to send products to.) These days, I've come to accept and even expect that there won't be a reply, which is kind of depressing."

There has been suggestion that white/ European bloggers should shun attention bestowed upon them by brands as a sign of solidarity, but I personally disagree with this notion. All bloggers are incredibly grateful to be recognised in any capacity in regards to their blog, so why should said bloggers feel they have to miss out on lucrative opportunities (monetary or expose) because of the omission of minorities?!

For me, the responsibility lies with the brands to give a fair representation of their customers. It is not for bloggers to solely fight for equality, but for those at the helm to also fight for it. Charlotte is a blogger and fashion designer, and she has noticed repetitive behaviour with brands, "...with some bloggers becoming more and more popular, and with brands cashing in on them you start to realise that there is still a barrier. I have recently noticed that brands typically work with a certain type of blogger that is deemed 'pretty' or 'commercial', and there isn't much diversity at all. I think this creates minorities within minorities, and defeats the point of what blogging is meant to achieve." But there are some positive movements out there trying to break down those barriers, Charlotte explains, "Organisations like Diversity NOW!/ All Walks, work closely with designers to encourage diversity on the catwalk." This is a great thing but there needs to be more activism as any changes that do happen seem to be very slow moving.

Brands regularly working with bloggers is truly a wonderful thing, but we need to see different faces, personalities, and yes, ethnicities gracing websites as this would surely only show that brands are embracing the message that all are worthy and that the consumer is deserving of fair representation.

I'd love to hear what you guys think. Please feel free to leave a comment below, or send me an email: anautumnsgrace@gmail.com.