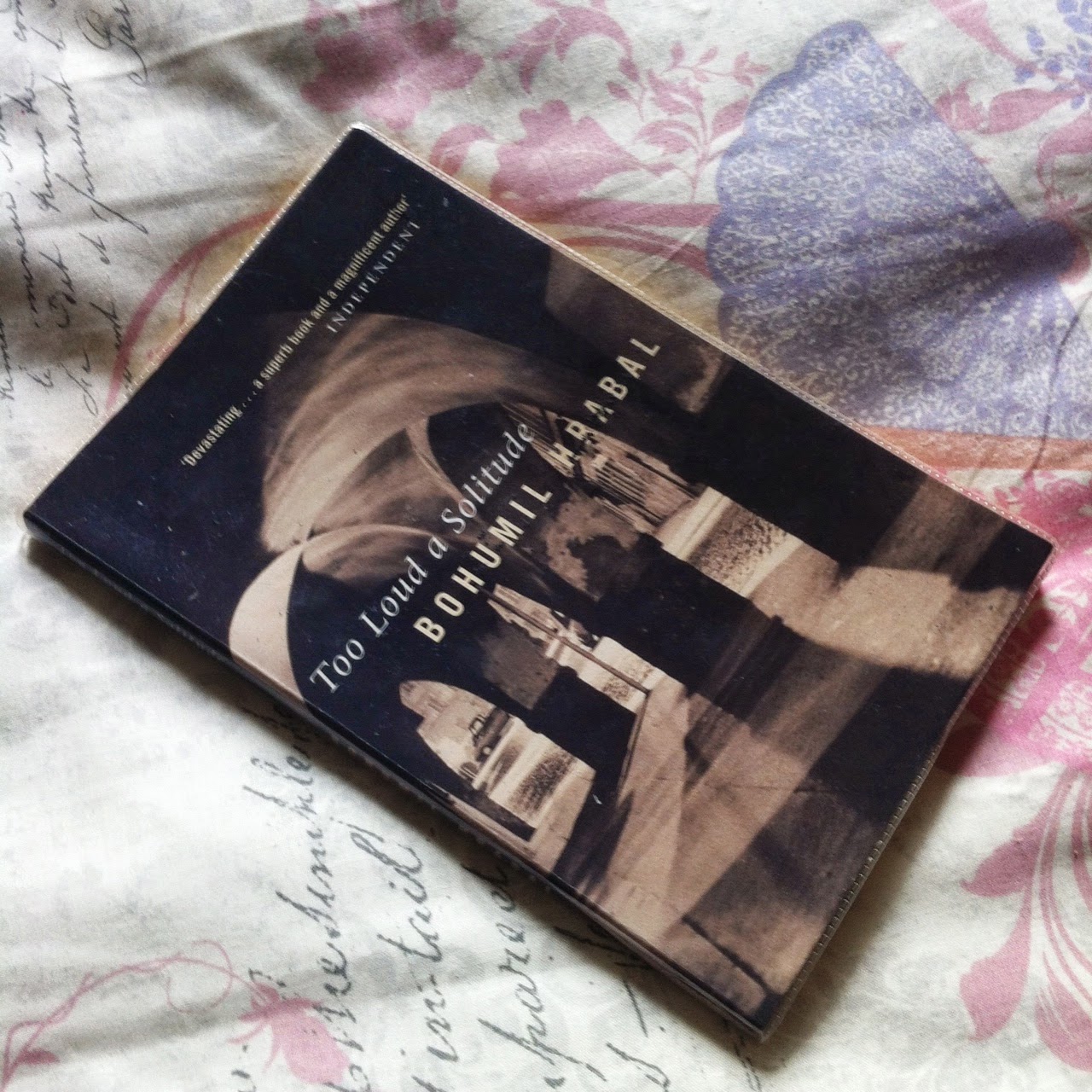 Too Loud A Solitude, available via Amazon

English Literature was by far my favourite subject during my studies. I hated my teacher in secondary school because he was a pervert (seriously), but arguing with him as to why he had next to no knowledge about literature (and then subsequently getting thrown out of class), were my partial highlights of those lessons. He really had no clue about the substance and importance of literature and would throw ridiculous theories at us about the authors "thought process". I hated that. I personally don't like the idea of picking apart an authors book to decipher what the message is - the message is what you want to be, the message is what you take from the story/ poem/ play, etc once you've reached its conclusion. That's what I love about reading and indeed, writing myself. It's an amazing way to escape and venture to worlds anew with each page, and that everyone interprets said page in different ways.

College was when I met the most inspirational teacher, Caroline. She would sing 'Stranger in the night' whenever someone was late and would act out fight scenes with her umbrella. I can't help but smile every time I think of her as she single handedly introduced me to literary text I never would have come across otherwise.

I often went to visit her in her office during my lunch or at the end of my day, and we would do nothing but talk about our literary loves. On one occasion she said she had gone to the library for me, and handed me a book.....

This wonderful story barely 100 pages long is about Haňt’a, a compactor of books, plays and art, for the past 35 years. These are not just any books, but books which are celebrated the world over and mainly from the Royal Prussian Library. Authors such as Goethe, Kant, (Friedrich) Schiller, Herder, Hegel, Nietzsche and Milton pass through his hands, into the press and into bales that are then taken away in trucks. Haňt’a cannot help himself but to read every piece of literature that are cast away in the cellar he works in. He is consumed by them, obsessed with them and cannot live without them; his home is piled high with books to the point where he daren't sleep in his own bed for fear of being buried under them! This extract from page one describes his obsession beautifully:

"Because when I read, I don't really read; I pop a beautiful sentence into my mouth and suck it like a fruit drop, or I sip it like a liqueur until the thought dissolves in me like alcohol, infusing brain and heart and coursing on through the veins to the root of each blood vessel."

He is forever overwhelmed by the weight of books - physically and mentally.

The books are being destroyed as a result of the fearful government - knowledge is power, so they pass these books to someone whom they think is a dimwitted fool, and to them, certainly not someone who could cause damage. But what they don't realise is that they have created something special. The cellar in which Haňt’a works, as a metaphor, could be seen as the only place knowledge is able to thrive - and it thrives within Haňt’a.

Haňt’a does have a literary ally in the form of a former professor who worked for the Theatre News. Haňt’a gifts him publishing’s of national politics and news, all is done very secretly through fear of repercussions. Apart from his unnamed ally and a loved lost in childhood sweetheart, Manča, Haňt’a has had very few connections. He speaks of a romantic relationship with a Gypsy girl (also unnamed); a simple girl whom we are later told was taken to a likely concentration camp and killed. There is also an odd relationship with the mice in the cellar. They go about their business amongst the books, nibbling away and making a home in the destruction. There are very few names mentioned in the book and I can only assume it was because of the times. The Hitler ideal of dehumanisation. Trying to make clones out of the masses with no identity and no individuality. No dreaming of a better world through literature wonders - thank goodness this did not last!

But again, a metaphor could be drawn here between the gypsy girl and the mice - innocent passers by trying to live their day-to-day, only to be disturbed by something they do not understand.

There are many biblical references in this story and Haňt’a was initially going to be called Adam, after Adam from the Garden of Eden. Adam is described as a man whom has a thirst for knowledge, to see the alternative and thus, bites an apple from the forbidden tree. Haňt’a in turn is soaking up the words of these books that have been condemned by government.

I don't want to reveal too much, but Haňt’a is told by his appalling cruel boss that a new machine is set to turn his world upside down. It's a machine that compacts in mass, destroying books by the hundreds, a completely different method the one Haňt’a is accustomed to - tossing books in the chamber one at a time. It forces Haňt’a to reassess his life, his work and his relationship with the books he loves dearly.

In the end, the voices in Haňt’a's head, through quotations and musings, and with the imminent master machine which would make him obsolete, become too loud for him - too loud is the solitude he experiences and realises will only get worse.

I of course won't reveal the end, but for me, the glaring message I took from this story was that to "press" is to create and destroy the written word. We press to print and we press to compact.

We cannot do one without the other - such tragic irony.

I wrote an essay about what I thought of Too Loud A Solitude and showed it to Caroline. She asked me to sit down and she read it from start to finish. When she was done she simply asked if she could keep it, and placed it in her drawer without another word. I don't really know what she thought of my essay. I know from our hours together that there would have been things she would have totally disagreed with, but I also know she wouldn't have asked to keep it if there wasn't something that made her heart leap.

I don't know what Caroline is doing now, but I hope she's well. I think she'd like the fact that this book has stayed with me all these years and that she's the reason why this wondrous book (which I have reread almost every year, since) means so much to me.


Don't forget to check out the reviews from my fellow Nerdsville crew - just the three of us this month: