So I went to see Radiohead for the first time last night, and my head is still completely in the clouds. Radiohead are my favourite band and I remember watching the video for 'Anyone Can Play Guitar' on MTV (when MTV was actually cool- if you blinked, you missed it), and being enchanted by Thom York spinning around like a Looney Tune (a sign of things to come)- that was where my love for them started.

Like any love though, you go through ups and downs. For me, the downs were 'Amnesiac' and about 90% of 'Hail to the Thief' (I know, I know- sue me!).......but then they released 'In Rainbows'. I was apprehensive when they announced they were releasing a new record. As already mentioned, the two predecessors did nothing for me, and I so wanted to love this record. I downloaded it but didn't listen for a few days, but when I finally did- it was heaven! I cannot express how much this record means to me and I welcomed it like a warm blanket on a Winters morning. For me they had gone back to what I had fallen in love with at the start!

The set itself was mostly dedicated to King of Limbs (obviously), but there were dashes of brilliance from their other albums, and I was transported back to my innocent times of being a kid, and spent the entire show jumping and spinning around with Thom (who is officially *the* best dancer the world has ever known!)- much to my friends surprise as she'd never seen me embracing sheer abandon before. It was incredibly liberating.

Highlights for me were 'Daily Mail', with Thom rocking his head from side to side as he played the piano- it was so beautiful. 'Nude' and 'Karma Police' were the big sing-alongs, 'Weird Fishes' was just gorgeous (Eds vocal support makes the song what it is); and then everyone of course went gaga to 'Everything In Its Right Place'. There was also the new(ish) song, 'Identikit'- great to hear that live too!

However, whenever you see someone live, you do tend walk away with a feeling of 'it was wonderful, but...'. For me it was wonderful, but I would have loved to have heard 'Paranoid Android', 'All I Need' and in particular, 'Fake Plastic Trees'. Don't get me wrong, this doesn't detract from the show itself as I absolutely loved it, and they haven't played 'Fake Plastic Trees' since 2010. Plus, with a back catalogue as extensive as theirs, they can't play everything, but it would have been a dream to be present and hear 'Fake Plastic Trees' live. Depending on the day and my mood, I have never failed to listen to that song and not cry; whether it be a glistening tear or full on hiccupy break down, that song still resonates with me....so many of Radiohead songs resonate with me- hence them being my favourtie I guess. But the ability to write someones life story without even knowing they exist??? They write my life story, they describe my pain, my love, my infrequent joy, my anger and my want. Of course, these are all based on how Thom feels when he writes and is not based on my life at all, but when you come across something in whichever facet of creativity, which does this for you...well you feel like you're not alone in this. You feel like someone actually understands you and feels the same way (however abstract or distant they may be in relation to you and your life).

This is what their music and lyrics do for me.

There are those who will never get to see their favourite artists perform live: Jeff Buckley, Ramones, Nirvana, Miles Davis, just to name a few. This is why I am absurdly lucky the band I love the most are still alive and creating music they wish to share with their fans.

Here's the set-list in full (thanks to NME, because my memory is just appalling these days!):
'Lotus Flower'
'15 Step'
'Bloom'
'Kid A'
'The Daily Mail'
'Myxomatosis'
'Climbing Up the Walls'
'The Gloaming'
'Separator'
'These Are My Twisted Words'
'Like Spinning Plates'
'Nude'
'Identikit'
'Karma Police'
'Feral'
'Idioteque'
'Pyramid Song'
'Staircase'
'Morning Mr. Magpie'
'Weird Fishes/Arpeggi'
'Reckoner'
'Give Up the Ghost'
'There There'
'Everything In Its Right Place'

Here are a few shots from my vantage point: 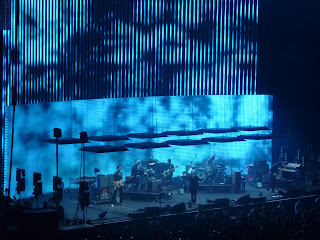 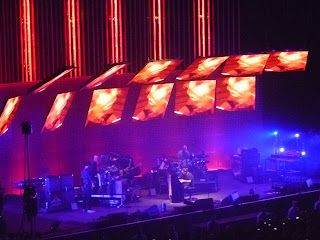 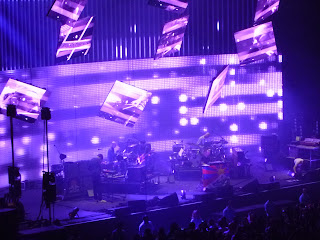 Oh and this is what I wore, LOL: 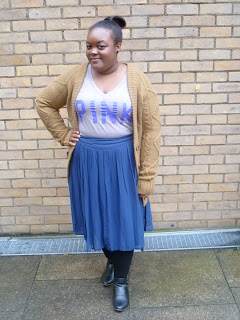