So its been a little while since I touched base with you, and this isn't really a clothes post but more of an update.

I went to Paris recently and it was a dream! I last went there when I was 13 for a school trip and I hated every minute of it! People were rude and had no patience for students, and I nearly got run over by some mad man (who was thoroughly enjoying the terror in my eyes!) :( I swore I would never go back there and until this trip, I had avoided the place like the plague.

Anyways, my friend Alexia invited me and my friend Rosie to visit her and stay for a few days- we of course jumped at the chance and headed for the Eurostar. It was pretty chill and went by really quickly (but that was probably because I slept through the journey).

Alexia is currently staying in the cutest flat ever! It was a one bedroom flat that was so gorgeously decked out and typically French. I had a clear idea of the places I wanted to go, courtesy of the lovely Katie who in short, gave me the best list ever!

The Pere Lachaise Cemetery and Shakespeare & Co. Bookshop were my favourite parts. I'm a *huge* Shakespeare fan, so having a bookshop that was dedicated to him and his works was such a thrill. I bought three books from there and you get this cute little Shakespeare stamp and a bookmark to go with them. I'm such a nerd, so this was like hitting the lottery! Below is a cool picture from inside (you're not meant to actually take pictures inside :/) 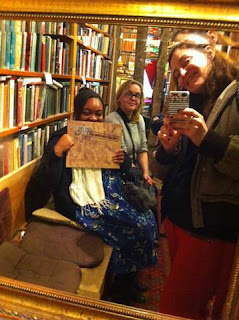 Myself, Al and Rosie (I bought three awesome books from here- joy!)

I also really wanted to go to Musee D'Orsay, but we decided it would be really clever to avoid the crowd of the weekend and go on the Monday instead. When we got there, we were so smug because there were no crowds and no queue. Went to see where the heck we could get in, only to discover the place is closed on Mondays! I seriously wanted to cry :(

We did so much walking and although the underground is the fastest way to get to places, you obviously want to see your surroundings, walk around and soak in the gorgeous views. The architecture there is beautiful! They are really rustic and grand- lots of stone walls and marble and they're all so tall, you spend most of your time looking up!

The weather was horrible and rainy for most of the weekend, but picked up the last couple days. They are still maniacs on the road too! It's like they are going out of their way to run you the hell over! If I had a pound for every time I called someone a dick, I'd be a rich lady!

All in all it was a fab trip, and I can't wait to go back!

Once I sort out the nightmare of my two cameras (that's long, long story) I will post a few more here along with boring my friends on Facebook with even more- fun time :D

'Til next time folks.